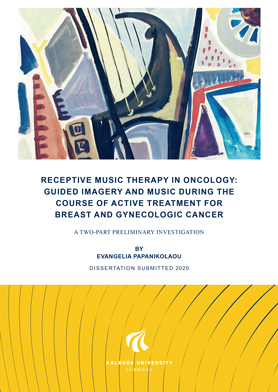 PhD Thesis by Evangelia Papanikolaou: Receptive Music Therapy in Oncology: Guided Imagery and Music During the Course of Active Treatment for Breast and Gynecologic Cancer. A Two-Part Preliminary Investigation

This project is a very first attempt to explore and evaluate the potential of the receptive music therapy method Guided Imagery and Music (GIM) as a brief psychological intervention for women who are receiving chemotherapy or radiotherapy in an outpatient Greek Gynecologic Oncology hospital unit.

Receptive Music Therapy in Oncology: Guided Imagery and Music During the Course of Active Treatment for Breast and Gynecologic Cancer. A Two-Part Preliminary Investigation

A GIM session involves an initial conversation followed by listening to a specifically designed sequence of music pieces in a relaxed state. The client describes to the therapist any images, emotions, sensations, or thoughts elicited and supported by the music, and afterwards, there is a verbal processing of the experience.

The overall preliminary investigation has two main aims: the first aim is to examine the feasibility of such a complementary intervention in a hospital setting that has no intervention other than standard medical care. Since there is no systematic evidence concerning applications of GIM during the course of active medical treatment for cancer, the second aim of this preliminary investigation is to pilot a randomized controlled research design inquiring into the role of GIM as a supportive therapy for women during the course of chemotherapy or radiotherapy and its potential effect on relevant psychological variables. Should findings indicate that GIM can be an effective treatment, this preliminary knowledge can inform clinical practice and give suggestions for a large-scale research protocol.

Therefore, this thesis consists of two investigations. The first investigation is a mixed-methods feasibility study including a qualitative and quantitative part, with a small purposive sample of four participants. Women received a series of six approximately weekly, individual, short GIM sessions, and they completed the FACT-G and HADS questionnaires at two time points (baseline/pre and post therapy) and 10-point Likert scales for fatigue and hope, before and after each single session. This was followed by a qualitative interview with focus on the perceived experience and participants’ feedback on feasibility and delivery of the intervention (frequency, location, length, etc.). Results: Positive changes in mood, fatigue levels, and hope were reported by the participants while the changes in hope and fatigue were also supported by the results of the Likert scales, but, no significant changes to self-reported anxiety and depression and QoL as measured by HADS and FACT-G were found. Consequently, the variables of fatigue, hope, and mood have formulated the research questions for the second part of the investigation.

The second investigation is an experimental, randomized controlled trial (RCT) pilot study, in which the questions, procedure, and design were adjusted and constructed according to the feasibility’s outcomes and indicated direction. Participants (N = 20) with breast and gynecologic cancer were randomized into a Treatment group and a Control group. The Treatment group (n = 10) received six approximately weekly, individual, short GIM sessions in addition to standard care, and the Control group (n = 10) received standard medical care and two supportive verbal psychotherapy sessions, one at baseline and another after 6 weeks. Participants in both groups completed the same questionnaires on mood, fatigue, and hope. Profile of Mood States (Brief), Cancer Fatigue Scale (CFS) and Herth Hope Index (HHI) were used at baseline and post-treatment, and visual analogues scales (VAS) for Hope and Fatigue were used for 6 consecutive weeks. Results: VAS for Hope and Fatigue showed significant changes in increasing hope and decreasing fatigue in the Intervention group, but there were no significant pre-post within-group differences for the three standardized questionnaires HHI, CFS, and POMS; however, the Intervention group showed medium pre-post effect sizes on all three measures. GIM showed promise to be effective in decreasing fatigue, increasing hope, and mitigating distressed mood for women undergoing medical treatment for breast or gynecologic cancer.

The ultimate aim was not only to obtain preliminary documentation on the potential effect of the intervention but also to gain data on the practicality of GIM as a psychological therapy during the course of active treatment for breast or gynecologic cancer. Within this context, one other purpose of this investigation was to gather preliminary information as to whether a full trial could be feasible to conduct in the Greek hospital system. For this purpose, information was gathered about various components that are necessary for a trial such as recruitment, adherence, and variability outcomes, and explored whether they can work properly together. According to these, recruitment must be assisted by medical staff, and persistence by the researcher is needed to keep up with allocation and total completion time. Cultural and socioeconomic issues should be considered as they may play a major role in patients’ compliance and engagement with therapy. Treatment fidelity issues need to be also taken into account; although GIM in shorter form and simplified music is feasible in such population, session format and therapeutic processes must be handled with flexibility to accommodate the needs of a clinical population with limited resources.

Overall, this PhD study contributes to clinical practice and research by providing new evidence on the role and significance of GIM in a new and under-researched clinical area, specifically, during a course of active cancer treatment. The promising quantitative results in combination with the qualitative findings, provide a multi-dimensional understanding of the effects of GIM for the study participants as well as of its role and feasibility in such a clinical setting. The importance of enhancing hope, and positively addressing fatigue and mood for women cancer patients becomes evident from these preliminary results. However, in this small-scale investigation with sample from only one hospital unit, the results cannot be generalized. Another limitation of this study is the inclusion of participants with first cancer diagnosis as well as advanced cancer patients, two categories that often have a different psychological profile due to stage of disease, suggesting the need for a more homogenous sample in the future. There are discrepancies in the findings between repeated measures VAS results showing statistical significance and the psychometric instruments HHI, CFS, and POMS that did not show significance. The reason for this is unclear, and further research is needed to clarify this. Therefore, future research is recommended not only on qualitative, in-depth experiences of the patients, but also on measurable psychological outcomes in a larger-scale study.

It should be clarified that the term Gynecologic Oncology is used as an umbrella term for breast cancer (BC) as well as all types of gynecologic cancers (GC), since the hospital unit that hosted this study provides care for women with the aforementioned cancer types. However, little evidence in general has been found in the literature regarding patients with GC care and their psychological needs, and there is no evidence about any specific characteristics of patients with gynecologic cancers in Greece. Thus, the emphasis of the first part (feasibility study) was on patients with GC only, in order to identify any specific needs or characteristics that could have been pointed out by the participants of this Greek sample. However, since no particular trends were revealed or suggested by the participants, women with breast cancer also were included in the sample of the RCT pilot to enlarge sample size of the research investigation.